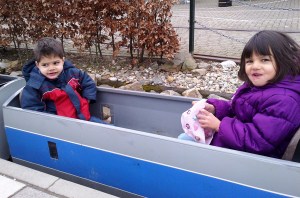 A small but enthusiastic group met at Het Spoorwegmuseum on a cold by dry winter day.  Since all of the attendees were Museumkaart holders, entrance to the museum was free! And, to add to the excitement of the day, most arrived by train from Tilburg that dropped them off right in front of the museum’s doors!  The group was greeted with bag lunches and while everyone munched away, a small explanation was given about what was available to see and do at this very large, historic site.

Around and around we go!

For the most part, the group stuck together and the kids set the pace of the day.  Luckily for this event, we had dry weather that allowed the kids to play outside for a while.  The kids took a spin on the miniature train that did slow loops around a pond, under a tunner and over “road” crossings.  After the testing out the slides and the climbing rock, the group went straight for the new exhibition, “Trial by Fire.”  The Fire Test, like all the other rides in the museum, was a real experience. Movies, props and special effects turned the Fire Test into a super-exciting journey through history.

Afterwards, the group separated and families explored their favorite parts of the

The mini-train with the life-size train in the background!

museum including the overhead viewing of the old steam locomotives, the Steel Monsters ride, the Örient Express” theater show and, of course, the gift shop!

The group met up again for ice cream (and coffee for the older kids;) and talked about what the kids found most interesting.  Of all the great exhibits in the train museum, the kids really loved the mechanical train (that you usually see outside shops) that took the kids on a stationary ride with motions and sounds to complete the experience!

After having a ton of fun, the group called it a day and headed home with tired, but happy, little people who won’t soon be forgetting their day at the Train Museum!

By tilburg international club in Activities, TICKids on 7 April 2013.
← Book Discussion of “Before I Go to Sleep” Happy Queen’s Day/King’s Day →