We had a nice group of 9 join in on this evening to see the new IMAX action/sci-fi flick, Oblivion, starring Tom Cruise. Jack Harper (Tom Cruise) is part of a two-person crew tasked with protecting Earth’s remaining resources following a cataclysmic alien invasion that left the planet uninhabitable. Along with his partner Victoria (Andrea Riseborough), Jack stays behind on earth to oversee and maintain a deadly armada of defense drones to protect machinery harvesting the planet’s resources, but Jack starts to suspect there is something amiss with his mission.

The scenery in this movie was absolutely breathtaking made even larger 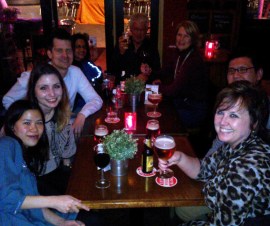 The group enjoying drinks after the show!

than life by its IMAX presentation. The (thin) plot twisted and turned, and though there were similarities to many previously seen sci-fi movies, it kept you on the edge of your seat (or perhaps the deafening sound was the cause of that?;) Tom Cruise puts it his usual Mission Impossible/Minority Report hero of the day performance with perhaps a bit more heart and sensitivity while his minor-role partner ‘Victoria’ puts in a good showing of being the cold, manipulative woman-wronged. All in all, there’s just enough substance in this movie to keep you interested in the next big plot reveal but more than enough visual effects and scenery to keep your eyes glued to the screen.

After the movie, we moved on to a local bar to enjoy a few drinks and discuss the movie’s predictable ending as well as many other topics that kept the crowd talking and laughing well into the night.

By tilburg international club in Activities on 4 May 2013.
← Book Discussion of “Gone Girl” Monthly Borrel at Cafe Noir →