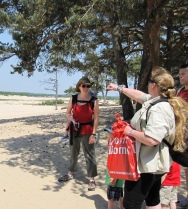 At the transition between forest and desert.

At a distance of about 20 minutes from the city of Tilburg you will find an amazing place, the national park Loonse en Drunense Duinen, named after the two villages at the South and the North of this nature reserve. Established in 2002, it’s one of the youngest Dutch National Parks, but it has a very long and rich history.

The dunes in this national park are unique and not to be found anywhere else in North Western Europe. Its sands are always moving. At the end of the 19th century, woodlands were planted around the ‘drifting lands’ to control this unusual movement. On the south side of the park lies the De Brand marshland. Although very beautiful in autumn and winter, the best way to explore the Loonse and Drunense Dunes is on foot or by bike in spring or summer.

And, this is exactly what TIC members got to enjoy with Marjolein van de Klashorst, a nature guide and park ranger, on a special tour to explore the typical desert flora and fauna!  In addition to sand, the Loonse en Drunense Duinen also have many mosses and grasses. An interesting sight was the transition area where the pine forests and heather gradually merged with the shifting sands. 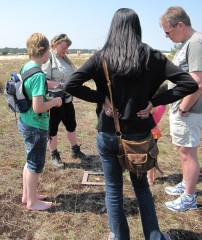 The area is also home to many songbirds, birds of prey, roe deer and even badgers.  Although we didn’t meet any of the wildlife on our adventure, Marjolein had several specimens for the kids to look at and pet.  We also saw tracks of several different animals in the sand. 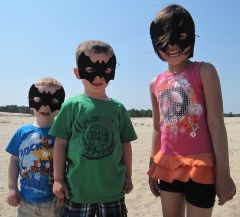 The kids participated in an exercise of “framing” an area on the ground they found interesting. Marjolein then explained what was “framed.” Some of what the kids found intersting were lichen,

horse droppings and desert grass. The also participated in a game of tossing pinecones into a bullseye on a varying point scheme.  Cheating soon ensued….; To close out the afternoon, all the kids put on their bat masks over their best bat faces and got to have their picture taken.