On October 28th, 6 TIC members met to discuss the best-selling book by Haruki Murikami – Norwegian Wood. This book, written in 1987, propelled the author to literary stardom – much to his dismay! Fame was one thing, but the craziness of superstardom sent the author to the anonymity of Europe to live until 1995. Norwegian Wood is still the one Murikami book that “everyone” in Japan has read, and now we have read it as well!

Our views were varied, with some of us liking the book and the author’s style of writing, while others thought it too slow moving;”it didn’t pull me in”. All agreed that the book is very different from Murakami’s other books in that it was “normal”; no fantastical characters or occurances as in Kafka on the Shore which was the first book we read in our group.

The story follows Toru and Naoko, who are joined together by the tragic suicide of their best friend years before. While the serious Toru begins to adapt to campus life in the tumultuous 60’s, Naoko retreats further and further into herself. She is Toru’s first love and a clear contrast to the independent and sexually liberated Mid 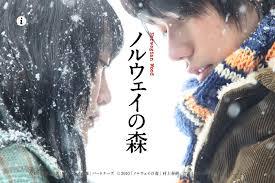 ori, whom he meets on campus and begins a friendship with.

The story is told by the grown Toru when hearing the Beatles song, Norwegian Wood sends him back in time to his student days. We were left wondering what he was doing in life and who he was with, if anyone? While the story seems autobiographical at times, the author denies this.  At any rate, we had an enjoyable and lively discussion around the fireplace, with tea and cream puffs 🙂

After reading the book, I was curious about the text of the Beatles song – had I ever heard it? While it didn’t sound familiar, I searched for it on YouTube and once the music began, I recognized it. The text is surprisingly fitting for the book:

I once had a girl, or should I say, she once had me…

She showed me her room, isn’t  it good, Norwegian wood?

She asked me to stay and she told me to sit anywhere,

So I looked around and I noticed there wasn’t a chair.

I sat on a rug, biding my time, drinking her wine

We walked until two and then she said, “It’s time for bed”

She told me she worked in the morning and started to laugh.

And when I awoke, I was alone, this bird had flown

So I lit a fire, isn’t it good, Norwegian wood.