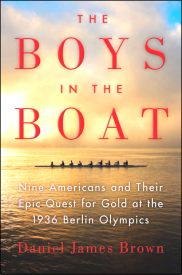 27 Sept 2016. The first meeting of tíc readers starting with chatting about summer vacations (and the first debate of the US Presidential election!) and then we settled down to talk about The Boys in the Boat.  This non-fiction book, written by Daniel James Brown (not to be confused with the Dan Brown of The Divinci Code) is about the 8 man rowing shell from University of Washington that went on to become the US’s Olympic entry in the controversial 1936 Berlin Olympics – Hitler’s Olympics!

The story is told mainly from the vantage point of Joe Rantz, a teenager without family or prospects, who rows not only to regain his shattered self-regard, but also, to find a real place for himself in the world. At a time when rowing- or crew- was dominated by the elite East Coast Universities, the Washington boat was filled with boys who were the sons of loggers, shipyard workers and farmers. No one expected them 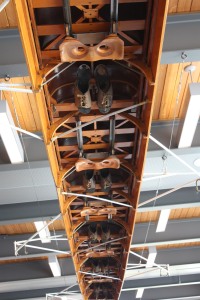 to triumph over the elite East Coast teams and Great Britain, but they went on to challenge the German boat rowing for Adolf Hitler, winning gold by six-tenths of a second! In spite of knowing the outcome of the race at the onset, the story was still gripping and exciting as the boys overcame huge obstacles to win.

Although none of us know much about rowing, we were much more informed by the end of the book: the 8 man shell has 9 men in it, the ninth man being the small coxswain who determines the pace of the rowers. Each chapter started with a semi philosophical quote by George Yeoman Pocock, Washington’s magical boat craftsman/builder.  Brown interwove a lot of interesting facts about the depression era, as well as the Nazi actions and preparations for the Olympics through the story which all found very interesting. We learned that bringing the Olympic flame to the games was an idea conceived by Leni Riefenstahl, Hitler’s favored cinematographer who was to film the Olympics. Added to the good footage she had already gotten of the gold medal race, Riefenstahl got the 3 top teams to row again the next day with her cameramen in the place of the coxswain and first seat to add close-ups to her overall footage. The resulting film, Olympia, was a masterpiece of innovative filming and earned Riefenstahl worldwide accolades. All in all, everyone liked the book but some thought it was too detailed in the middle and would have been stronger if its 400 pages had been cut down somewhat. 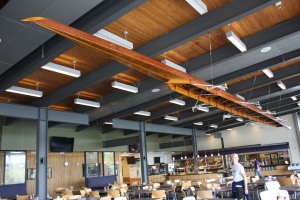 By happy coincidence, I happened to be in Seattle, Washington this past summer visiting a good friend. She had also read the book and suggested a trip to the University of Washington where the Husky Clipper – the 1936 Olympic 8man shell – hangs suspended from the ceiling in the dining commons above the Shell House.  It was amazing to see the long, light and thin boat and marvel at the history I now knew she contained!

(On a side note, Riefenstahl’s Olympia is still considered a classic film and it’s available for rental at Cinecitta (Willem II straat). I plan to organize an evening for those interested to watch together – be on the lookout for an invitation. )

By tilburg international club in Book Club on 16 November 2016.
← October RAW Borrel A dark and stormy US election night borrel →