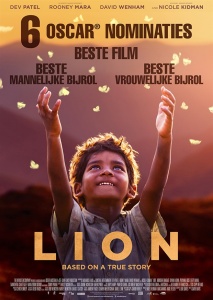 On Friday, February 3rd, we met at Cinecitta for a night at the movies. We seem to be in a period with many good and interesting films to choose from, but the one we went to was, Lion, surprisingly enough, not a nature film, but one that took place in both India and Australia.

The film tells the story of the Indian, Saroo, and his search to find his home. While it sounds pretty straight forward, nothing could be less true! As a 5 year old child from rural India, Saroo gets locked in a train that travels several days, finally stopping 16,000 kilometers later in busy Calcutta. Not knowing the Hindi language spoken in the city, unsure of the name of the small village from which he came, or even his Mother’s name (“Mama”), the authorities cannot help him get back home. While

many dire things could have befallen Saroo, he is taken to an orphanage from which he is adopted by a loving Australian couple.

Once Saroo starts college, he starts having more and more memories of his real mother and brother, as well as the surroundings of his Indian home. With the aid of Google Earth, Saroo sets out on the seemingly impossible task of finding the Indian railway station from which he left 25 years earlier and from there, his way home.

The fact that the whole thing is a true story – proven by the photos of the actual people during the credits – is absolutely amazing. (After seeing 5 year old Saroo trying to find his way alone in Calcutta, I will never, ever complain about the difficulties of adjusting to life in Tilburg!) Add to a gripping story (the film has been nominated for 6 Oscars), there was also excellence in acting from Dev Patel who received the BAFTA for Best Actor in a Supporting Role.  7 TIC members, drinks and snacks after the film, and what do you get? A great start to the weekend!

By tilburg international club in MovieNight on 21 February 2017.
← A look back at the Christmas Cookie Workshop Open Position, Treasurer →