Expats enjoy their time with TIC

I am Amit Kumar, and a previous member of TIC along with my wife. We joined TIC at the end of 2016. It was really a very nice experience being a part of TIC. We enjoyed a lot, made a lot of friends. TIC organised lot of activities and group sessions of various kinds.
There are lot of opportunities to do something and meet with new people and friends. Moreover, everybody was open to new ideas and discussion. From the day trips to some city, to exploring the famous museums, watching movies together, to going for a picnic to book discussion to crashing at Borrels in some pubs etc. they have lot to do.
There were a lot of opportunities to meet people from different countries and get to know their culture and heritage. Moreover, TIC arranged a lot of events which helped get to know and adopt the Dutch culture.
I would definitely recommend to joining TIC. 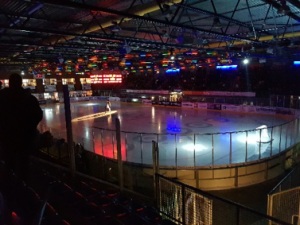 As many people do not know, Tilburg has the best club ice-hockey team in the Netherlands, the DESTIL Trappers (Pedals). So, in the sprit of getting to know our city and club, we arranged a trip to see one of the games, Trappers vs MEC Halle 04 Saale Bulls, the Bulls being a team from Germany as the Trappers are at a too high level to play in the Dutch league.

which due to distance was very empty. Anne was very good to print out the rules of Ice hockey, as for many of us this was our first game.

Then with a bang, the games started with a light show and the fans singing Trappers songs. Anyone that has ever attend a William II game would know all the songs.

The game was fast and full of action with no team having a clear advantage in the first half until, of course, the away team scored just before the end of the half. During the break I did enjoy some of the fatty foods that are on offer during sporting events.

In the second half, Tilburg had something to prove. They came out fighting and managed to even the score, but in Sport, that is never enough. So, the Trappers do what they do best and put a puck in the net to end the game 2:1 . A great result and a great game. If you get the chance, please check them out. 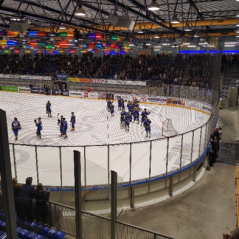 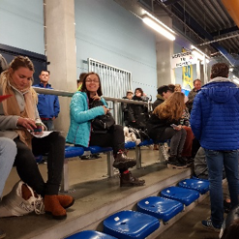 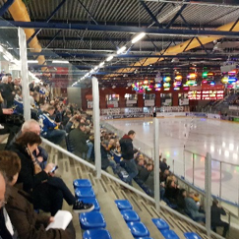 I have worked and lived in the Netherlands since 2005.  Sometimes it feels like I have been here forever and other times it feels just like yesterday! I was born in St. Louis, Missouri, USA but lived most of my life in Knoxville, Tennessee. I grew up as a typical American kid. My father taught high school and my mother was a secretary. My brother and I were very lucky to have such devoted parents and they always appreciated and supported that I had a different view of the world.  From a young age, I had a tremendous fascination for “all things European” and I desperately wanted to travel and take in all the beautiful wonders that Europe had to offer. But, alas, I put those dreams on hold and followed a more traditional path, working towards my Master’s Degree and taking a “safe and secure” government job.

After a few years, I was approached by a company and give an opportunity to participate in the start up of a new service center for repairing aircraft engines.  I was ready for a change and jumped at the chance. After a successful start-up, my company sent me to their sister facility in Tilburg to give some assistance and also receive some training. Later, I was offered a transfer to the facility in Tilburg. Although I was nervous about making such a move, my mother’s sound advice of “You will only regret what you never try”, rang loud and clear!

I also discovered TIC during this time and that added a whole new perspective to my life here in Tilburg. It has been great meeting such diverse and fascinating people and sharing stories (both good and bad) about life as an expat. Being on the board (event director first!) has also enriched my experience and broadened my view of the world in ways I could have never imagined.

In the spring of 2010, I took position with another company – this time one that was European owned.  That “sealed the deal” for me and I plan on staying in The Netherlands indefinitely. I have a great life here. I love all the different cultures and individualism that this small country has to offer.  A part of me will always be partial to “home” but as the old saying goes, “Home is where the heart is” and mine is definitely in The Netherlands!

New Year seems to stretch itself out in the Netherlands, so in true Dutch style, TIC celebrated its 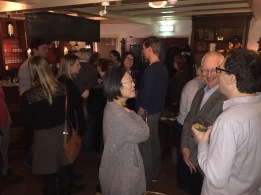 holiday dinner on January 20th – better late than never! It was great to see so many members, both old(not like that) and new, turn out for this popular event where we ate, drank, and mingled.

‘t Elfde Gebod (the 11th commandment) created an almost exclusive atmosphere in itsupstairs room for the 30+ internationals, and among the religious-themed decor, we alltold stories of Christmas and New Year, with a welcome drink of bubbly. According to Andrew, the 11th commandmentis “thou shalt drink” and several of us were more than happy to oblige.

After an initial hour of catching up, it was to the tables, where a delicious three course meal was served, and conversation turned to country cultures, as well as the usual “how I ended up in Holland” story for those newer members. Curiosity kicked in when another group joined us in the upstairs space and we were keen to know what club they belonged to.

Between courses some seat-swapping went on so everyone had chance to catch up and introducethemselves to any unfamiliar faces, as we filled ourselves on salmon, steak, pasta, dame blanch, and other treats in between.

It seemed as though a great night was had by all, which made for the perfect way to kick-start the second half of the TIC season and get chatting about some of the exciting events coming up on the agenda. 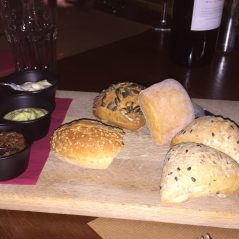 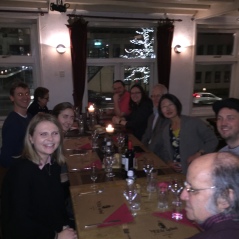 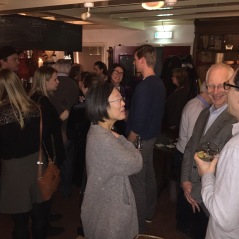