21 Oct 2018. It was a clear, but chilly day at Grotto in the Oude Warande in the neighbourhood of Tilburg University. tíc members (and a few guests!) met at the pavilion, Grotto, in the middle of this small forest for a warm drink to keep out the chill.

This cave inside a glass box is a structure located at the point where eight paths converge from the forest in a baroque formal garden. The interior of the building is sunk into the ground and has holes at eye level to afford glimpses of the park outside.

n 2007, Fundament Foundation commissioned Callum Morton to design a pavilion where the baroque design of the garden was to be respected, it had to be at the central point of the park, the only spot from where the star-shaped pattern of the paths can be seen. However, a pavilion in this position would destroy the

view of the star design. This presented Morton with a dilemma, which he resolved by creating an exterior that is not immediately apparent, because it is a mirror, so all eight paths of the star continue in the reflection.

tíc kids and adults alike had a great time around this unique building playing soccer, racing a remote control monster truck and munching on warm snacks despite the cold nipping at noses, ears and fingers! It was a beautiful autumn day filled with good company and lots of laughter. Probably one of the last clear days, as the rainy, fall weather has finally arrive in Tilburg. 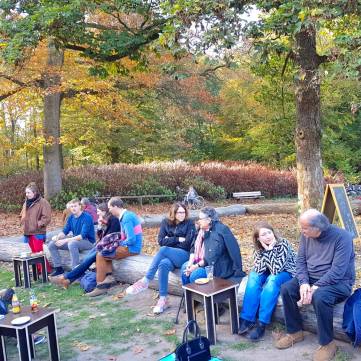