19 Mar 2019. For our March book club gathering, after getting a warm drink, we settled around a crackling fireplace and with a tray of yummy snacks. While not everyone had finished the book, Educated, all agreed that it was a remarkable story and well written.
Tara was the youngest of 7 children and her childhood looked idylic on the surface – living on a breathtakingly beautiful mountain in rural Idaho with her own goats and horses. Her mother was a midwife and herbalist and Tara spent a lot of hours walking on the mountain, gathering rose hips and mullein flowers that her Mom could stew into tinctures.
Tara’s father had a scrapyard and his children were his workforce. But the scrapyard was a particularly dangerous place and the kids had frequent, and sometimes serious injuries, a fact that Tara’s dad seemed unable to understand or react to. Her father’s word was law in their household and since he had a profound distrust of the medical profession, believing that doctors were agents of Satan, ALL injuries were treated with herbalism only.
While Tara’s Mother homeschooled all the children, “there was not a lot of school taking 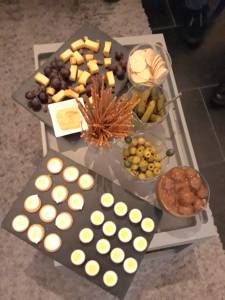 place. We had books, and occasionally we would be kind of sent to read them. But I never took an exam, or never wrote an essay for my mother that she read or nothing like kind of getting everyone together and having anything like a lecture. So it was a lot more kind of if you wanted to read a book, you could, but you certainly were’t going to be made to do that.” Through her older brother Tyler, she discovered a love for classical music, as well as the fact that she had a gift for singing. Her horizons broadened when she became a part (and often the star) of local musical productions and she first felt a desire to learn about something no one in her family could teach her. After self-teaching herself enough to pass the A.C.T. tests, she was accepted at the Mormon Brigham Young Uiversity (BYU) and stepped into a classroom for the first time at age 17. She soon discovered she was clueless about much of what was common knowledge for everyone else. She kept her head down and made good use of the college library and the internet to fill in the many holes in her knowledge. The path of her education and intellectual broadening took her from BYU to Cambridge to Harvard where she ended up earning a PhD. But every step outside the expectations, the rules came at a cost. Do something different and lose a piece of connection to your family. And family was extremely important, particularly for a person whose entire life had been defined by family.

The break with her family came not through her increased education and intellect, but due to her relationship with her older brother, Shawn. He could be kind and understanding, but had a reputation as a fighter, sometimes turning his rage on Tara and her older sister. Possibly even worse was her family’s denial about it, even when it occured right in front of them. It is this denial that was hardest to bear. If your own parents would betray you by not believing you or looking out for you in the face of such blatant attacks, then what was the value of the family you held most dear in the world? Her refusal to “admit” she made up the stories of Shawn’s violent behavior is what ultimately led to the split with her parents and 3 of her siblings. Tara struggles with the yin and yang of her upbringing to untimately led her to find her true self. It was truly a remarkable story!

Not only is she one really smart lady, small snippets of online interviews showed her to be relaxed and poised, with great insights. See part of an interview with Bill Gates: https://www.youtube.com/watch?v=a7Y6Udf_Nzo . Not only that, she can really sing, as you can see in the following short clip: https://www.youtube.com/watch?v=MIO_QKq9cE  We – along with President and Michelle Obama, Bill Gates, Oprah, and Maarten t’ Hart – all found Educated to be a great and thoughtful read and we highly recommend it!