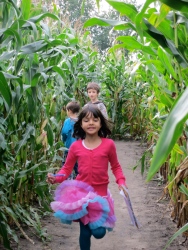 In keeping with the Fall spirit, for #FlashBackFriday, let’s take a look back at our run through a local corn maze!

22 Sept 2013. by Patricia Gonzalez. It was a cool, cloudy Saturday afternoon – the kind you get when autumn follows fast on the heels of summer as if determined to obliterate memories of 30-degree days. A fifteen-minute drive from Reeshof brought us to the Dutch countryside where the roads were lined with trees and every few hundred meters, farmhouses dotted the landscape.

Our little group gathered at a maisdoolhof (corn maze) in Dongen to go on a speurtocht (trailhunt). The instructions were simple: walk through the cornfield looking for letters and pictures. The letters, when combined, form a message. Sounds easy? Not quite. Once in the maze, 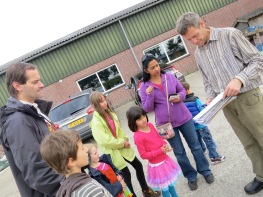 there were no signs to orient us, to remind us which paths we’d already trodden, which letters we’d already found. Even the tallest among us couldn’t see above the corn stalks and he was almost six feet tall! 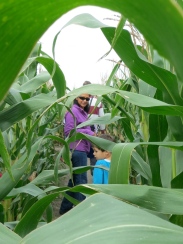 That didn’t faze the children at all. Each took a turn leading the group as we wended our way through the trail, peered through leaves for those elusive clues, walked along and doubled back down pathways. The maisdoolhof proved a challenge for children and adults alike.

We completed the maze in a little over an hour. Although to be honest, we missed a few letters and guessed the hidden message in the end. But that’s our secret. Shhh! 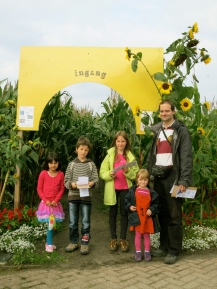 Afterwards, while the children played with boats, fished for plastic ducks and built kid-sized armchairs out of colorful mega legoblocks, talk among the adults turned to pumpkin-carving plans for Halloween, farming practices in the Czech republic, and the Dutch proclivity for food that comes from vending machines (we had heard from the farmer that at a neighbouring field, there was a machine that dispense strawberries).

That’s the fascinating thing about hanging around with expats. With their different perspectives and varied experiences from around the world, there are so many surprises at every turn that you find yourself happily lost in conversation.