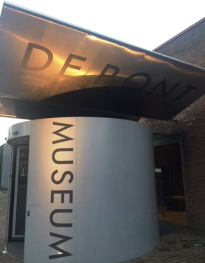 Tomorrow we’ll be hosting another fun borrel at Havana. For #ThrowbackThursday, here’s a look back at one of our borrels from 2017!

10 things I learned at the TIC borrel on February 17th at De Pont:

One: Modern Art museum De Pont is located in a former wool spinning factory and the large light spaces and intimate “wool rooms” offer a good setting in which to view modern art.

Two: The museum is named for the businessman Jan de Pont (1915-1987) who left a large sum of money after his death for the creation of a museum of modern art. The museum receives no government subsidy and operates solely on de Pont’s legacy.

Three: The museum was recently enlarged, adding new exhibition areas and a larger café/restaurant with a lovely terrace area outside.

Four: On one end of the new restaurant area, there is a lovely glassed in area which looks out over the garden – complete with crackling fireplace – where guests can relax on a comfortable couch and chairs to enjoy a drink and snacks.

Five: The “Flam Keuchen” on the menu (kind of thin crusted pizza) makes a lovely snack if cut in smaller pieces.

Six: The TIC members who attended didn’t have any trouble finishing the bottle of wine we ordered.

Seven: My favorite piece of art was the giant stainless steel piece made by Anish Kapoor – I was upside down over it!

Eight: For some of the other pieces, I need a little “help” to appreciate them, and had to remind myself that even though I might think I could make them…I probably could not!

Nine: No matter where the TIC Borrel is – it is always fun!