Home » Events » Social Event » Unfortunately, none of us escaped – Eaten by Sharks!

Unfortunately, none of us escaped – Eaten by Sharks! 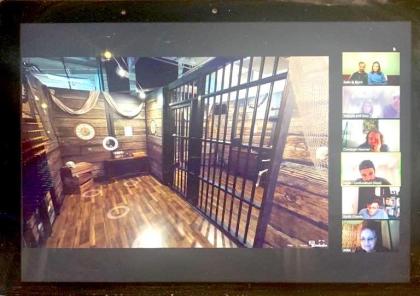 5 Feb 2020. by Essi Koskela. Enabled by Confundrum Escape Rooms based in Canada, 14 eager tíc members gathered behind their computer screens for a virtual escape room experience.

Participants were divided into two rooms, after being captured by the evil pirate Blackbeard and thrown behind bars on his ship. As the clock started ticking, we set out to explore the 3D virtual room for clues and useful items to try and escape. 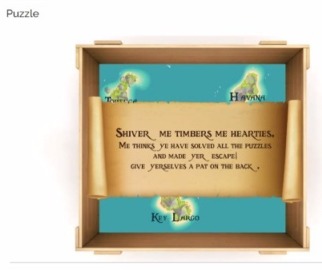 First-timers had a moment of confusion looking around the room, while the experienced escape room visitors were quickly absorbed by the puzzles, often forgetting to update the other members of the team with the progress! One-by-one correct solutions opened boxes with objects to facilitate the next deciphering problem.

The Great Escape – or not?

Both teams managed to get to the other side of the bars, only to find themselves in another room filled with puzzles. Not being physically in the same room added extra difficulty in following what the others on the same team were working on.

This extra challenge in teamwork must have been the reason why the 60 minutes was gone before the last code was cracked. Sadly, our captor was back to throw us to the sharks. Surely Blackbeard should have stayed ashore to pillage and plunder for another hour or so?

Our experience coordinator was kind enough to offer the consolation that both rooms were well ahead of the other room. After cross-referencing in the afterparty Zoom call, it turned out both teams got stuck in about the same point with one more puzzle-filled room to go.

The unfortunate ending of our pirate ship voyage did not lessen the enjoyment of the fun evening together cracking puzzles. After all, the selected room had an average difficulty of 60%, so we had every reason to be proud of ourselves (although it was agreed afterwards that next time we would aim for a maximum of 20% difficulty;)

After so much brain work involved, we kept the review short and sweet. With the virtual experience, the escape artists from tíc are waiting eagerly for this lockdown to turn into a lock up in a real-life escape room. Next time we will definitely not be eaten by sharks!