Tonight we’ll meet up for another tícMovie Night. For #FlashbackFriday, here’s a look back at the Pathé movie “Respect”!

17.09.2021. Respect – what I give Jennifer Hudson for taking on the iconic role of Aretha Franklin. It must have been a daunting task to try and emulate the “Queen of Soul” but I can’t imagine anyone else capable of singing all those hits any better (except Aretha, of course!)

A small group of tic movie lovers gathered for the film at Cinecitta and, although our seats were quite close to the front, it was almost like being at a concert. END_OF_DOCUMENT_TOKEN_TO_BE_REPLACED

15 Oct 2022. After quite the hype of the “dream-team” coming back to the theaters, I was curious to see the newest RomCom at the latest tic Friday night movie. An equally curious small group met in the lobby of Pathé to check out the night’s move. We enjoyed chatting a bit and getting acquainted/reacquainted before going into the film.

With the no-fail pair of Julie Roberts and George Clooney, our expectations were high…and we were not disappointed! The interplay of sharp barbs and natural chemistry between the 2 co-stars made for seamless delivery of some great one-liners while paving the way for a deeper story line of love, loss, forgiveness and new beginnings.

Overall it was a light-hearted, fun film that left us with a feel-good optimistic ending and a nice way to end the night.

11 Feb 2022. After months of not being able to have in-person events, I was thrilled to be able to plan one of TIC’s most popular events – the Friday night movie. I was not the only one starved for a fun activity as a total of 14 members signed up and we met in the lobby of Pathé. We enjoyed chatting a bit and getting acquainted/reacquainted before going into the film.

With a star studded cast, our expectations were high…and we were not disappointed! Lady Gaga was convincing as Patrizia Reggiani, later Gucci, with her beauty camouflaging her overwhelming desire for money and power. Adam Driver played the unsuspecting Maurizio Gucci, manipulated by his wife’s ambitions to push his uncle and cousin out of the company. Jeremy Irons was the perfect disapproving father who fails to dissuade his son from marriage.

A clearly old Al Pacino was really in his element as uncle Aldo Gucci, the brother really running the fashion empire. Jared Leto played his flamboyant and idiotic son, Paulo – “He’s an idiot… but he’s my idiot!” (Paulo reminded me that even made from high quality wool, the leisure suit – especially a mauve colored one – was not a positive fashion statement!!) The unbridled quest for power causes the family to unravel, taking the business with it. END_OF_DOCUMENT_TOKEN_TO_BE_REPLACED

08.10.2021. For our last book before the summer, Essi had brought 3 choices, all of which had been made into a movie, the suggestion being to read the book and then watch the movie together. What a fun idea! We set a date for the movie in September but ended up having to postpone due to…generational challenges. This I must explain, of course!

I, Anne-the-dinosaur, watch movies on Netflix or via a DVD, while Essi, who is young and hip, streams everything and doesn’t even have a DVD player. We would watch the film at my place, Anne’s, on my reasonably big smart TV but, due to an unexpected conflict, Essi could not attend. Since I felt that streaming a film was not something I was sure I could manage on my own and this older film was not quickly available any other way, we postponed to a later date. A hilarious step in our book-to-film adventure I think. 😊 END_OF_DOCUMENT_TOKEN_TO_BE_REPLACED

17.09.2021. Respect – what I give Jennifer Hudson for taking on the iconic role of Aretha Franklin. It must have been a daunting task to try and emulate the “Queen of Soul” but I can’t imagine anyone else capable of singing all those hits any better (except Aretha, of course!)

A small group of tic movie lovers gathered for the film at Cinecitta and, although our seats were quite close to the front, it was almost like being at a concert.

The film depicts Aretha’s life from a young girl into adulthood and how she overcame an overbearing father (played by Forest Whitaker), the death of her mother and abusive relationships to find her voice – both physically and figuratively. The film was over 2 hours but, if you haven’t seen it, make sure you stay through the credits to see a live performance from Aretha Franklin that is totally worth the wait!

Check out our movie review of The Honest Thief! 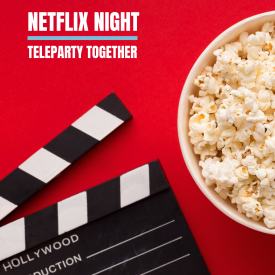 11 December 2020. by Masako Kato. I joined the tíc Netflix Party. Netflix Party ia an online film party where we look at the same Netflix movie simultaneously from our home and chat with each other about the film while we are watching it.

It was my first time to attend a Netflix Party and I had no idea how this was going to work. I already had a Netflix account, but I needed to download Teleplay, an app which lets you join the party.

TIC was as always very considerate and inclusive. That is to say that they gave us a very clear technical instruction what we needed to do and also organised a zoom call just before the movie started to help us with any technical hiccup. So, nobody needs to miss it due to the lack of technical skill. I needed this call to get help to activate my Telplay. END_OF_DOCUMENT_TOKEN_TO_BE_REPLACED 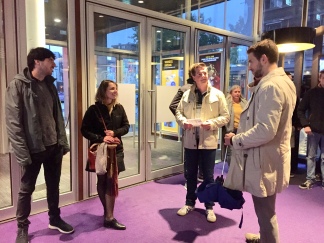 30 Oct 2020. by Martina Leonard. We were so lucky to have had our movie night before the 2nd closure of cinemas!

Hoping to cut a deal, a professional bank robber agrees to return all the money he stole in exchange for a reduced sentence. But when two FBI agents set him up for murder, he must now go on the run to clear his name (“In-and-Out Bandit.” ) and bring them to justice.

Many thanks to Anne for arranging the bag of goodies, a must for munching during the film. All 10 tickets were taken and the usual suspects attended at the Pathe. We met in the lobby and had no trouble recognizing each other with masks!! END_OF_DOCUMENT_TOKEN_TO_BE_REPLACED 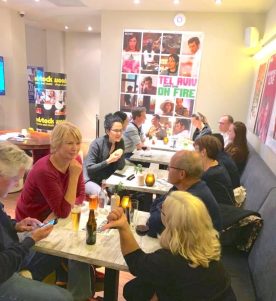 Next week we’ll meet up for another tícMovie Night.  For #FlashbackFriday, here’s a look back at the Cinecitta movie “Blinded by the Light”!

27 September 2019. For September’s tíc movie night, we were all “Blinded by the Light” at Cinecitta.

Without spoiling too much for those who still want to watch this film about the impact of “The Boss” Bruce Springsteen’s music has on a Pakistani teenager living in England, I give it two thumbs up! END_OF_DOCUMENT_TOKEN_TO_BE_REPLACED

tícMovie Night: The Secret is out!

25.09.2020. I woke up this morning with the pleasant buzz of knowing I’d enjoyed a good night out and have made new friends! It was movie night with tíc.  A simple idea, we watch a movie in its original language (English) and after the movie discuss it, over a drink, in a neighbouring pub.

Fourteen of us met at the Pathé.  The movie was ‘The Secret’ based on the book by the same name.  Reviews of the movie were divided, some enjoying it more than others.  Afterwards, sitting comfortably in the pub, the movie did not manage to hold our attention for very long as we quickly moved on to getting to know more about each other and our diverse, colourful backgrounds.  Laughter, fun & friendship!  As we left the pub around midnight, I knew I would be back for the next tíc event! END_OF_DOCUMENT_TOKEN_TO_BE_REPLACED