Meet the board! Events Coordinator 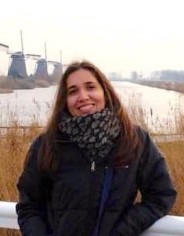 I grew up in the northern part of Mexico (Baja California). Since I was young, I was really interested in other cultures just by listening to people talking in their own language (even though I did not understand a word) or reading books where the story was somewhere in Europe. This gave me the idea that it would be nice to live somewhere outside Mexico, somewhere in Europe.

It was in August 2016 when my dream to live in Europe came true and I had the opportunity to do my Masters in Geo-Information Science at Wageningen University (NL). During my studies, I learned about other cultures, taste traditional dishes from those countries and I discovered more cities in the Netherlands. Moreover, I realized how easy it was to travel to other countries close by and “just like that” I felt in love with the country (although not with its weather but that is another story) and I have lived in the Netherlands since then!

END_OF_DOCUMENT_TOKEN_TO_BE_REPLACED

Meet the board! tíc Treasurer

I moved to the Netherlands in April 2017. I’m originally from a small town near Santiago in Chili which, compared to any other city here, is not that small! I grew up my whole life in the same place, going for holidays to the same place as well until I felt I wanted and needed to see the world.

That’s when I decided to go and study some of my university course in Canada, as an exchange student for a semester. I met amazing people from everywhere around the world and made good friends, but I also met an incredible Dutch man who is the reason why I’m currently living in Tilburg.

I studied business administration as my university degree and I did a master’s in economics in the same university, after finishing my studies in Canada. Since then, I’m always thinking about my next destination and even how difficult it can be to say good bye to your loved ones, living in a different culture is a tremendous opportunity that I think I’m experiencing at 100%.